Lives in New Zealand and works at Nga Pae o te Maramatanga, the National Institute of Research Excellence in Maori Research and Development at the University of Auckland where he is closely involved with a range of research initiatives.

He has an extensive background in Maori public health research and is currently involved in research into HIV/AIDS, sexuality and Maori men’s health. He has worked in the education sector for many years as well as in the government policy sector and community based organisations within the health sector. He is also closely involved in community initiatives related to HIV/AIDS and sexual health

Through his community networks, Clive has a very good understanding of community priorities and needs with regard to research. He also has practical experience of working with policy and other agencies in order to facilitate effective research outcomes.

Clive serves on the boards of Te Puawai Tapu, the New Zealand AIDS Foundation and the Human Rights Foundation. He is committed to working for the human rights of people who are marginalised and whose voices are often overlooked and ignored.

He has spent many years living overseas and has recently returned to live in Auckland with his partner Terry who is descended from the first Chinese settler of Australia and from English convicts. They have a nine year old son who plays rugby and the saxophone.

In his spare time, he enjoys gardening, socialising with friends and going out dancing all night.

Art is involved with National HIV/AIDS Social Marketing campaigns in Canada. One with the Canadian HIV/AIDS Information Centre on HIV/AIDS Discrimination and the other is the Assumptions Campaign directed at gay men in Canada. 2-Spirited People of the 1st Nations and the Ontario Aboriginal HIV/AIDS Strategy are co-hosts of the Indigenous Peoples’ Satellite at the XVI International AIDS conference to be held in Toronto in August 2006.

Art has been a member of the Ministerial Council on HIV/AIDS, he and other members of the Council provide advise directly to the Minister of Health. Art, along with others like Ken Clement and LaVerne Monette are on the National Aboriginal Council on HIV/AIDS, an advisory body to the Public Health Agency of Canada and is on the Executive Committee of the Canadian Rainbow Health Coalition based in Saskatoon, Sask.

J. Kevin Barlow is Mi’kmaq from the Indian Island First Nation in NB. He is currently Executive Director of the Canadian Aboriginal AIDS Network based in Ottawa ON. Prior to this post, he was Principle Consultant of his own consulting service mostly in the areas of Aboriginal Health and Community Development. Combined skills and experience equal over fourteen years in health related fields and community development. Almost his entire career, including a term as Band Councilor (1987-89) has been dedicated to working for and with Aboriginal people, providing significant knowledge of socio-economic, health, and self-government issues.

National experience further introduced Mr. Barlow to opportunities to partner with all three major Aboriginal groups, the First Nations (on and off-reserve), Inuit and Métis people. This involved Co-chairing with the Assembly of First Nations the former HIV/AIDS Focus Group under Medical Services Branch (now FNIHB), Chair of an Aboriginal Working Group on HIV/AIDS Research and Surveillance, under the Laboratory Centre for Disease Control (now CDIPC). He also sat on the National Task Force on Injection Drug Use, Chaired the 4th Canadian Aboriginal Conference on HIV/AIDS and Related Issues and was both a former Chair and Executive Director of the Canadian Aboriginal AIDS Network (CAAN).

These roles have broadened his knowledge of and commitment to overcoming many of the challenges facing Aboriginal people. During Mr. Barlow’s tenure as Executive Director for the CAAN, the renewal of the Canadian Strategy on HIV/AIDS occurred which again led to partnerships with Aboriginal and non-Aboriginal stakeholders. In identifying and positioning Aboriginal issues, he authored the discussion paper “Elements of an Aboriginal AIDS Strategy” while managing four national projects including the CAAN Injection Drug Use Project, a Social Marketing Assessment, the first National Aboriginal AIDS Awareness Day and a National Skills Building Forum.

Managing the Atlantic First Nations AIDS Task Force (AFNATF) as well as national experiences afforded opportunity and ability to build consensus. His leadership helped maintain a coalition of six Tribal Councils, thirty-four First Nations and others in the Atlantic to build the AFNATF. Mr. Barlow feels privileged to have served in numerous capacities that have contributed to social changes, for Aboriginal people in general, and those living with addictions and/or HIV/AIDS in specific. His career has shown leadership by raising the profile of Aboriginal HIV/AIDS issues.

Mr. Barlow also serves on the Board of the Atlantic Aboriginal Health Research Program under Dalhousie University in Halifax, NS. The program is one of the ACADRE (Aboriginal Capacity And Developmental Research Environments) Centers funded by the Institute of Aboriginal Peoples Health (IAPH) with the Canadian Institutes for Health Research (CIHR). Recent efforts involved researching and writing the Aboriginal Strategy on HIV/AIDS in Canada, as well as various research projects for the Aboriginal Healing Foundation. He has extensive experience developing various resources, including Young Eagles Challenge for youth, and Circle of Knowledge Keepers for inmates, both are peer education manuals.

LaVerne is a two-spirit Ojibway originally from Winnipeg, Manitoba. She is the Provincial Coordinator of the Ontario Aboriginal HIV/AIDS Strategy, a provincial AIDS service organization whose mandate is to provide HIV/AIDS information, health promotion and program and service supports for off-reserve Aboriginal people living with and affected by HIV/AIDS, their partners, families and communities.

She is a co-founder and past Board Member of 2-Spirited People of the 1st Nations and of the Canadian Aboriginal AIDS Network. She currently sits as a member of the National Aboriginal Council on HIV/AIDS, the Ontario Advisory Committee on HIV/AIDS, the Canadian HIV/AIDS Legal Network and is Co-Chair of the Provincial Advisory Committee to the Ontario HIV and Substance Use Training Program.

Prior to her work in HIV/AIDS, LaVerne worked in a number of diverse fields including positions such as the Director of Investigations and Legal Services for Ombudsman Ontario, the Executive Coordinator for the Indian Commission of Ontario, a tripartite negotiations mechanism for the federal, provincial and First Nations governments in Ontario and various community-based positions working in a variety of issue areas with Aboriginal community groups in Ontario.

Is the CEO/Editor of the Aboriginal & Islander Health Worker Journal. Prior to that she was employed by Streetwize Comics as their first Aboriginal Editor/Writer in mid 1987 and was responsible for producing It’s Aboriginal, The ATSIC Comic (voting information), Bushwize (HIV/AIDS/STD prevention and drug and alcohol information) and the Gotta Know series (six mini comics on HIV/AIDS prevention for Aboriginal communities).

In 1991 Kathy participated in the Commonwealth Youth Program, a scholarship awarded by DEET, to study in a one year program at the University of the South Pacific, Fiji. In 1992 she was a consultant to CEIDA, NSW Department of Health, Rozelle Hospital, Rozelle, NSW on the Koori Drug and Alcohol education project that produced a series of four posters dealing with addiction issues: heroin, pills, smoking, alcohol. In 1993 I was employed by NSW Aboriginal Health Resources Co-op as the state HIV/AIDS Co-ordinator. In 1995 I was a HIV/AIDS consultant to the WA Department of Health.

Kathy was employed as a consultant on the State Aboriginal Homes on Aboriginal Land project for the NSW Aboriginal Land Council and in 1997 was a consultant responsible for researching and producing the report about injecting drug use on the Block, sponsored by NSW Users and AIDS Association. For over twenty years she’s had direct involvement, personally, politically and professionally with all aspects of the HIV/AIDS epidemic as it affects the Aboriginal and Torres Strait Islander community.

Kathy has been invited to speak at many conferences and events including the 10th International AIDS Conference, held in Amsterdam, Netherlands in 1990 (the first ever Indigenous panel held at any International AIDS conference) and the first world Healing Our Spirit conference in Canada in 1992. In 1999 she accepted an invitation from the King of Jordan to participate in the WCRP World Assembly VII, Common Living, Jordan.

She has been and is still involved in her family’s ongoing Native Title matter. Kathy has also completed various educational goals and training programs, and been on a number of committees participating in numerous community projects. Her interests are in everything Goori (Aboriginal); bringing up children who are strong with belief in themselves, having Faith in that higher power that in turn maintains customs, language and Spiritual connections to land.

Yvonne M. Davis is President of the Board of Directors, National Native American AIDS Prevention Center; a consultant to the University of New Mexico’s Center for Health Promotion and Disease Prevention, a multi-ethnic group of over 50 researchers representing the diverse communities of New Mexico; and President and CEO of her own consulting firm, Davis Consulting. Davis Consulting specializes in health prevention program planning services, strategic planning and evaluation planning to tribes, tribal programs and agencies, corporations and non-profit organizations working directly with tribal organizations. As part of all of these activities, she consults regularly with national programs representing a variety of health-related fields in the development of highly innovative solutions from initial program planning to global-impacting problems such as HIV/AIDS and STIs.

Previously, she administered an internationally recognized program on HIV/AIDS Prevention for the All Indian Pueblo Council, Inc. located in Albuquerque, New Mexico. This program provided innovative and effective HIV/AIDS prevention strategies for tribal communities located in New Mexico. In addition, she gained invaluable experience as a Public Health Advisor for the Center for Disease Control and Prevention (CDC) and an integral member of a multi-disciplinary team tasked with eradicating STIs’; as a participant on strategy team with the Office of Women’s Health that advocated prevention services for HIV/AID among indigenous people, in particular women of color; and an active volunteer with both the New Mexico Governors’ Task Force on HIV/AIDS and the regional Community Planning and Action Group.

Educationally, Ms. Davis recently completed her Masters in Public Health (MPH) at the University of New Mexico and is continuing her studies toward her ultimate goal as a physician. During her master’s program she served as a Research Assistant on the Native American Research on Community Health (NARCH) project within the UNM-MPH degree program. Specific assignments included the direct translation of a survey instrument to measure Community Social Capacity into the Navajo Language and co-instructing a course on Public Health and Health Care Management at Dine’ College, Shiprock, New Mexico.

Yvonne, as she prefers to be called, is a member of the Navajo Nation and was raised on the Navajo Reservation in Arizona and New Mexico. She currently resides in Albuquerque, New Mexico with her husband, Michael, and their three children.

Is a Muxhe native (transgender) from Juchitán City, Oaxaca, Mexico. That is a Zapotec Culture town. She speaks Zapotec language and Spanish. She is studying to get a degree in Social Investigation at the Universidad de la Tierra in the Oaxaca state’s capital.

Amaranta Gómez Regalado is an activist in the fight Against HIV/AIDS and a Sexual and Reproductive Health promoter since 1995. She has been a MacArthur Foundation grant holder for the “Educating and Strengthen the Muxhe Community from the Isthmus of Tehuantepec in Health, Sexuality and HIV/AIDS” project during the period 1999-2001. She is a Packard Foundation ex-grant holder for the investigation project named “The Perception of Risk from Migrant Central American Women regarding HIV/AIDS” made in Guatemala City, Guatemala with the PASCA Project co-operation.

Amaranta has been coordinator from a field investigation about “The Muxhe Community in Juchitán and its Sexual Identity”, facilitator in Gender, Sexual Identity, Self Esteem, Sexuality, Social Leadership, Politic Incidence, Health and Key Communities for the Public Politics workshops, etc. A Sexual Rights Promoter for Vulnerable Groups in the Isthmus of Tehuantepec region as the Muxhe community is.

Member and founder of Communitarian Networks 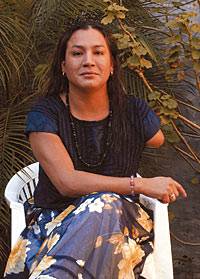